Best-known for her popular blog, My Parisian Life, providing an insider’s guide to the city, Yanique Francis is also an event and wedding planner and a budding wellness practitioner. Here the former New-Yorker reveals a few of her favourite local haunts… 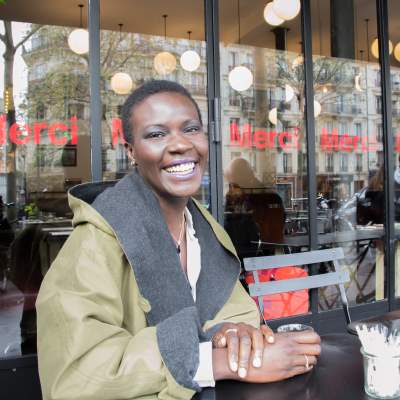 A resident of Paris for the last 10 years, there are few parts of the city that Yanique hasn’t visited

1. What initially inspired you to move here or visit?
I moved to Paris with my ex-husband, who is French, from New York. That was back in 2007 and, whilst it took a bit of time to get to know the city, now I am totally in love with it. So, 10 years later, I’m still here.

2. Earliest Paris memory?
If I’m honest, I think my first impressions of Paris were tainted because of coming here from New York. I mean, I loved the beauty of the architecture and the amazing food here, of course, but I also got quite annoyed with how cold people could be, compared with back in NY, and the difficult administrative processes. So, I suppose I had a bit of a love/hate relationship with the city – but that’s like any relationship really. Love is all about accepting those things you thought you never could accept, and focusing on the positives and what you can give each other, and it’s exactly the same for a city.

3. Best neighbourhood you’ve ever lived in?
That’s a hard question because I’ve lived in three different neighbourhoods, all of which I’ve loved. Firstly, I lived in the 2nd, within walking distance of the Louvre. That, for me, is a very special neighbourhood because it represents the Paris I had always imagined – all the beautiful buildings, lovely cafés, great markets, lively local culture etc – and all the famous sites are very accessible too. Then I lived in Belleville, in the 10th, which was a very different but equally rewarding experience. That area is much more working class, with lots of lots of street art and cheap Chinese food, and a mix of hip, young students and older Parisians who will have been drinking at the same bar for 20 years. So that was a more alternative Paris, which I also loved. And, finally, there’s the 18th where I am now. Here, I love how diverse the area is, with the picturesque streets of Montmartre and beautiful Parisian architecture complemented by the super-colourful cultures of the African and Indian neighbourhoods. This is home for me now.

4. What’s the best meal you’ve eaten in Paris?
That’s another difficult question, as I’ve eaten at so many places in Paris! I guess, for me, it would usually be the last memorable meal I had – and, right now, that would be the one I ate at Les Foodies, which is in a little side street in the Marais. I’m not so keen on the name, but everything else is great – the décor is so colourful and the food is a really interesting mix of French and Japanese and all beautifully presented. I had roasted calamari with feta cheese; something I would never have put together but it totally worked.

5. And your sexiest moment here?
Sexiest moment, hmmm… Do you know, I think they happen every day in Paris. For instance, even just having a coffee “en terrace” – that can be sexy – because people come to the terrace to enjoy good coffee, and to people-watch etc, but they can also be quite flirtatious too.

6. What do you hate most about living in Paris?
Well, there’s the bureaucracy, which I already mentioned, but also the classism, which plays out a lot here. France is a nation of hierarchy, and that is very strong throughout all aspects of French life. In anglophone cultures, there’s a sense of standing shoulder to shoulder, but that just isn’t the case here. For example, you aren’t really supposed to question anything your boss says or speak up at all – outspokenness can often be seen as a flaw. Maybe that’s not everyone’s experience, but it was certainly hard for me coming from such a different culture. 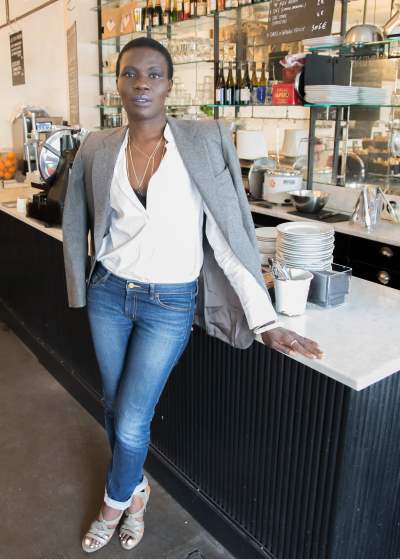 7. Who’s your favourite Parisian — be they living or dead, real or fictional?
I really admire Josephine Baker, the entertainer, activist and French Resistance agent, for the life that she lived. She was a real pioneer for black women living abroad. It must have taken lot of courage to live outside her own country, and do what she did, but she went on to achieve great success.

8. Favourite cinema?
That would have to be the MK2 on the Canal de l’Ourcq where I take my son, Pierre. It’s really cute because the cinema straddles both sides of the canal, with one part on the Quai de la Loire and the other on the Quai de la Seine, and you can get this little boat from one side to the other. So, you can enjoy a picnic or dinner or whatever and then jump in the boat and watch a movie.

9. Right Bank or Left Bank? And why?
It’s a mixture really. The left bank is more reflective of my personality, and I spend a lot of time there for my work, but the right back is where I live my own life – where I am a mother rushing around here, there and everywhere. In both cases, I tend to go everywhere by bike, which is a great way to see the city because it’s like a history lesson; you just learn so much every time. I’m forever thinking, hmm, I must find out about that interesting building, or being intrigued by how one style of architecture changes to another, and then I go home and find out why.

10. Favourite caviste?
I have a few actually. Firstly, I’m a big fan of En Vrac, here in the 18th. They do really decent wine, straight from the barrel, accompanied by delicious sharing plates of cheeses or saucisson at pretty reasonable prices. You can even buy a bottle to take home if you want and then you bring back the bottle next time. I also like Vingt Heures Vin, again in the 18th, where we go to play chess and listen to music.

11. Where do you go to escape the city?
My favourite place to escape to is probably Normandy. It’s not so far away and yet there’s a beach, where you can swim at certain times of the year, and I love the seafood there too. So that’s good for a weekend getaway, but then there’s also Bordeaux and Reims… There are so many beautiful places you can easily access from Paris.

12. Where are the best-looking girls or boys in Paris and why?
Hmm, I think that depends entirely on what you are into! But you’ll be sure to find beautiful people at Le Comptoir Général, on the Canal Saint Martin, and at Le Perchoir. The latest one of those has opened recently on top of the BHV building, in the Marais, and there’s always a line of beautiful people, queuing around the corner, to go in there! But then you’ll also see beautiful people in my local bar around the corner.

13. Where do you get your news?
Just talking with friends really – you know, having conversations with people – the old-fashioned way, I suppose.

14. Favourite museum?
For many years, it was the Musée Carnavalet, which tells the history of Paris. Every time I go there, I just learn so much. I am so in love with Paris and therefore I can never learn enough really. I am also a big fan of the Musée d’Orsay for the architecture; it is housed in the former Gare d’Orsay, a Beaux-Arts railway station built between 1898 and 1900.

15. Favourite shop?
I’m a big foodie, and love to eat and cook, so I really like the specialist grocery store, Julhès, in rue du Faubourg Saint-Denis. It’s great for cheeses, wines and, well, pretty much everything really.

16. Who’s the most stylish Paris personality?
That would have to be the French fashion designer Yves Saint Laurent. A lot of designers see women almost as accessories to their designs, but he creates beautiful clothing for women. He was also one of the first designers to include black women in his fashion shoots and catwalk shows. I think for all women that is really important – to have representation in fashion and to see other people like them. And the designs themselves are stunning – he not only tells a story through each item but he has an impeccable attention to detail.

17. What is your favourite film set in Paris?
I love all the Julie Delpy films – the French-American actress, director and screenwriter. I like how she compares and contrasts the differences between Anglo and French cultures. It’s a great way to discover how French you’ve become as you relive your own experiences through her films.

18. What about Paris most inspires you?
For me, one of the things I like best about Paris is how it forces you to be your best self. On the one hand, I feel so incredibly lucky to live in such a magical city, where many people would give anything to be, but then, on the other, it’s easy to get weighed down by the everyday things like the admin. Being surrounded by such beauty though reminds you to make the most of things.

19. What makes someone a Parisian?
I think it’s when you pick up on the nuances of other Parisians.

20. What’s your favourite French word? (Swear words allowed!)
I don’t think I could pick just one. Having come here speaking zero French, but now proudly fluent, I love every single one!