California dreaming of a new home in Paris 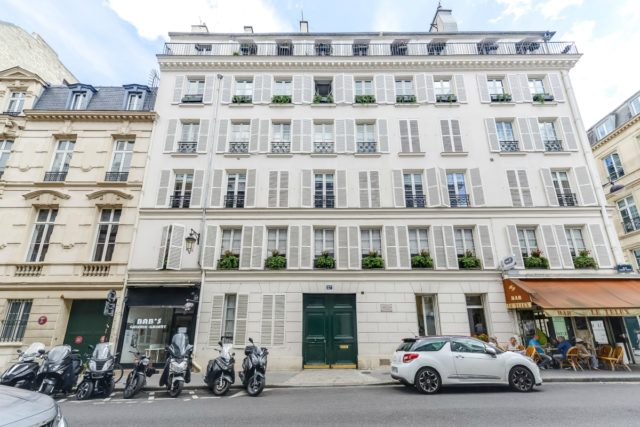 The pretty building dates from the late 1800’s

When Eric and Joan Davidson decided to buy a home in Paris, they weren’t sure where to begin. Thankfully, the team at VINGT Paris was able to help every step of the way – including through a renovation – ensuring it all went without a hitch 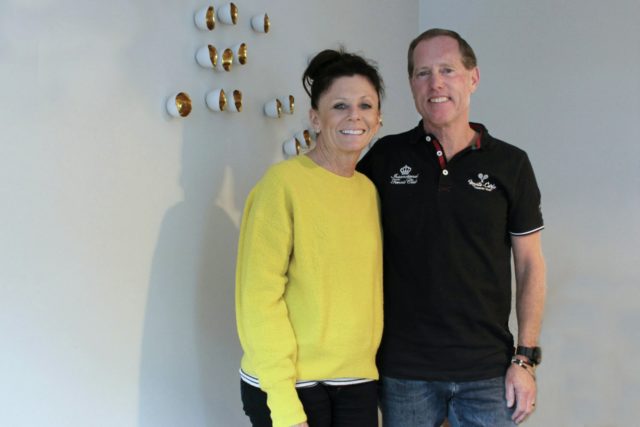 Eric and Joan Davidson are delighted with their new Paris home

For Eric and Joan Davidson, their love affair with Paris began on their honeymoon back in 1985 and has continued ever since. Over the years, the couple have travelled here often from their home in Laguna Beach, California, sometimes visiting up to three times a year, and their connection with the city was strengthened further when the youngest of their two daughters began studying at the American University of Paris. No wonder then that they decided to cement the relationship by buying their own Parisian pied-à-terre last year.

“We had always talked about buying a second home in Europe, and where better than here in Paris?” says Eric, as we chat over coffee in the super-stylish dining room of the apartment that is now their own. “Whilst we really enjoy visiting the French countryside, we felt too young to go and live in some sleepy little village, and as we have always loved Paris, it just felt right for us. We also like to travel and it’s a great base for visiting other places across Europe too.”

Although the couple had got to know the city well over the years, they are the first to admit that they had no idea where to start when it came to buying a property. After all, knowing where to go for the best baguette is one thing, but getting the inside track on which neighbourhoods offer the best value for money property-wise is quite another. They were delighted, therefore, when they were introduced to the team at VINGT Paris and discovered that help was at hand.

“They were absolutely fantastic all the way through,” continues Eric, who runs his own company specialising in the provision of senior housing. “We just connected with the team there straightaway and they made the whole process so smooth. We looked at around 10 properties in total – mostly in the Marais and a little bit in Saint-Germain – but then we found this place, and it just felt like somewhere that we could see ourselves living.

“Not only did it have a great location in a quiet, peaceful street in the 7th, which is home to some of the city’s best-known attractions, but this one had such wonderful lighting with a total of nine windows down one side. Coming from a beachside location in the States, to have light and sky was very important to us, so this place seemed to offer the best solution for us in every way.” 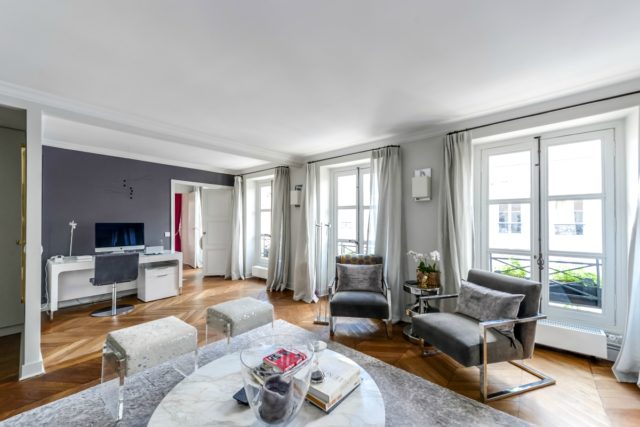 The Davidsons’ new apartment is looking beautiful after its recent makeover

That said, there was still going to be a lot of work to do. While they both liked the layout of the apartment, the décor itself hadn’t been touched in a very long time, so was in desperate need of an update. Just as well then that Joan is an interior designer who has run her own design company in the States for more than 25 years.

“It was especially exciting because this project was so different from anything I have done before,” says Joan, who works mainly with commercial clients. “Also, our own home back in the States couldn’t be more different, as we had that built for us. As a result, it’s very contemporary in style, comprising mostly of glass and steel, with a lot of black, white and grey, whereas here we were dealing with a very historic building dating from the 1890s.”

For their new French home, Joan first wanted to lighten the feel of the apartment, making the most of the natural light from the gallery windows, and giving it a fresh, up-to-date feel – while also preserving the lovely original features. On the other side of the apartment, they had also discovered a ‘secret’ window, which had long ago been blocked up, so opening that up again was a priority. In addition, they were keen to replace the kitchen and bathroom and to re-do the master bedroom, not to mention moving a couple of internal walls. So, no small undertaking – and all in their second language. 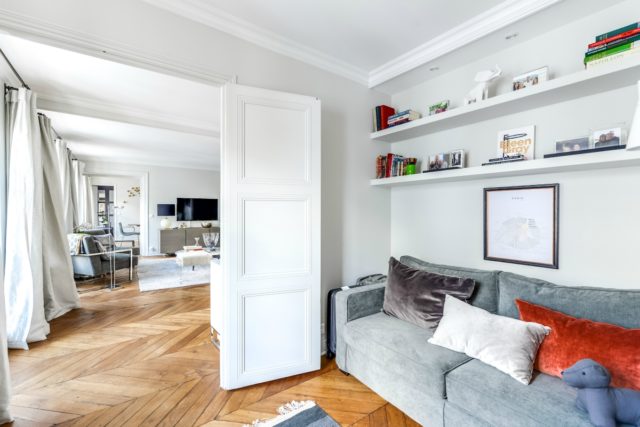 Thankfully, this was where VINGT Paris was able to help once again, with one of their interior design specialists, Henry Personnaz, project-managing the renovation. Working under Joan’s careful direction, he co-ordinated all the necessary construction and decoration work while also assisting with other aspects of the project.

“After the initial meeting, things got going very quickly, selecting tiles, paints, fabric, hardware, lighting, kitchen appliances, bathroom fittings etc,” says Joan. “We would look through magazines, websites and brochures, and then he would take me to the best design shops and flea markets etc to find all these things. Henry was very cost-conscious, on every level, but especially talented for knowing where to go for each thing. He made the process very simple and fun.” 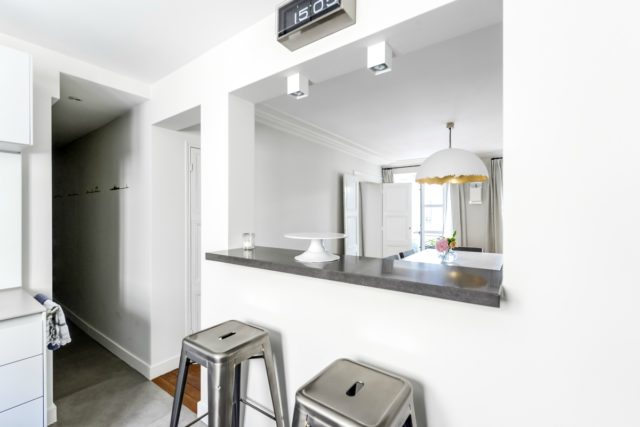 The stylish new kitchen has a handy bar area

Straight out a magazine

Visiting the apartment today, it looks like something straight out of a magazine shoot, with the state-of-the-art fittings and modern décor working in harmony with the historic features. It feels light, airy and super-stylish and yet the place still has soul.

“The challenge was to come in and make it our own but keep the character of the place,” continues Joan. “For example, we knew we wanted to retain the flow of the space as we love the fact that you can see all the way from one end to the other. We also kept the parquet flooring because the original features are the charm of these buildings. And whilst we did remove a couple of original doors, to free up the space further, we then reused them elsewhere on wardrobes and closets etc.”

In terms of the new décor, the starting point was a remarkable piece of gold wall art that adorns one side of the dining room. Sourced by Joan from a little artisan shop at Laguna Beach, it comprises 60 pieces of gold-painted porcelain – all of which had to be individually mounted.

“You should have seen the faces of the contractors when I told them that,” laughs Joan. “The plaster here is very hard, and it’s therefore very difficult to hang anything, so they thought I was nuts! Also, the lady at the shop had said the best way to plan the design was using Post-It Notes, so I have these hilarious photos of little yellow pieces of paper all over the wall before they began. But they, the installers were very proud of themselves when it was all finished.

“Anyway, the upshot of this was that when I was trying to pull all the colours together, I kept coming back to the gold. So, this is echoed in the striking light fitting, other gold accents in the decor, and also in the powder room where we felt we could have a bit of fun with the metallic wall panels. It’s all set against a backdrop of mostly light-grey paint, except in the guestroom where we went a little bit pink.” 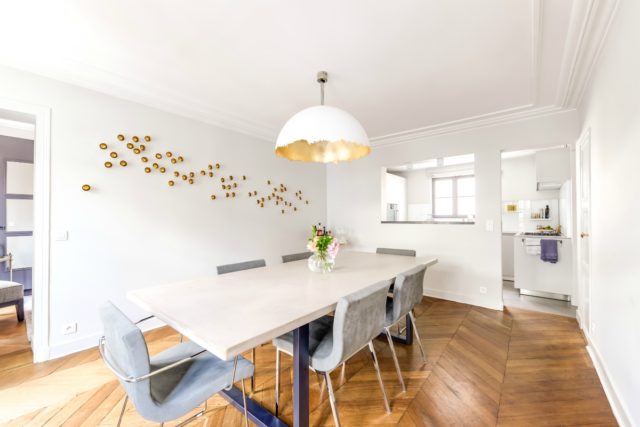 The gold wall art was the inspiration behind the colour scheme

Now that the renovation is complete, the couple are enjoying their new double-life living between Paris and California. They say their favourite things here are being able to walk everywhere, unlike back home where a car is a must, and visiting the great local markets and world-leading art galleries on their doorstep. They are also just around the corner from historic department store, Bon Marche, and like to treat themselves at one of the lovely patisseries in the neighbourhood.

“We are also very much into our sport and exercise,” says Eric, who is a keen tennis fan. “So, we have all our classes and gyms organised now and I’m hoping to find a good tennis club soon. And there’s nothing quite like going to watch the French Open at the Stade Roland-Garros each year.”

So, now that they are living the dream as it were, what advice would they have for other people thinking of taking the Parisian plunge or planning a renovation? Any particular tips they’d like to share or handy hints to impart?

“Spend time in your chosen neighbourhood – getting to know it – so that you can really tell if it’s the right one for you,” says Eric. “But, as for us, if we were doing all this again, we would do everything exactly the same. Thanks to the team at VINGT Paris, it all went remarkably smoothly with everything completed on time and on budget – the entire process was seamless.”