Home » Creatives » A secret garden haven away from the crowds 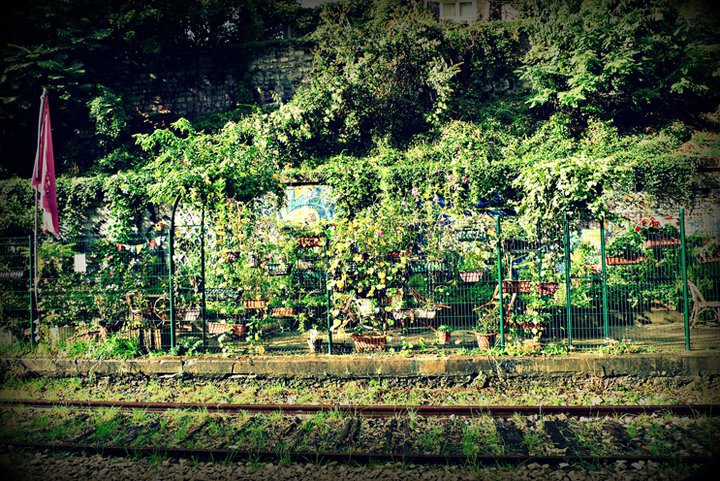 If you want to escape the crowded parks when the sun shines, Paris has some lovely ‘secret’ gardens just waiting to be explored, such as this hidden gem tucked away in the north of the city…

A well-kept secret among locals, the Jardins de Ruisseau are a little haven of peace that blossom quietly along the disused railway in the Porte de Clignancourt area, just a stone’s throw from the famous flea market. Far from the madding crowds, garden-less Parisians ‘in the know’ retreat to this pretty oasis of blooming flowers and buzzing bees whenever the sun shines. What is more, the cultural activities that take place here also create a much sought-after ‘vie de quartier’.

So, if you have had enough of the city’s parks seething with bodies basting in the sunshine, look no further. Simply stop off at the end of line 4 and saunter down to the end of rue du Ruisseau, and under the bridge to what used to be the Ornano metro station up until the 1950s.

Literally meaning ‘garden of the brook’, the Jardins du Ruisseau first came to life almost 20 years ago now. Located mainly on the north side of the tracks, it all started when residents of the charming little cobbled street, Villa des Tulipes, got together to see what could be done to rehabilitate the abandoned wasteland adjacent to their homes. Through their association, ‘Ecuyer des Tulipes’, they began task at hand with a lot of hard graft and the cleaning up of the entire area.

At the heart of things was local resident Audrey Dauman, the founder of the association, who played a key role in inspiring her entourage to pitch in – as well as liaising with local authorities such as the Paris préfecture, the national network of railways and the SNCF. Her efforts paid off and in 2004 the Jardins du Ruisseau opened as a ‘shared garden’, as they have become known, with a donation from the authorities totalling over a quarter of a million euros.

Today, the Jardins du Ruisseau are the heart and soul of the community, especially for families in the summer. Run by Les Amis du Jardin du Ruisseau, not only does this verdant oasis bring vegetation to an area where there is no park nearby, but it is also used to educate visiting schoolchildren about the local fauna and flora. At the weekends, this welcome retreat often attracts passers-by for a picnic or to enjoy a concert along the railway.

A true garden of Eden in an urban environment, it’s an initiative that is now starting to be imitated in other parts of the city, and should surely be adopted by cities around the world. In fact, we’re pretty sure that this hidden haven won’t remain much of a secret for long.

Need to know:
Where: Jardin du Ruisseau
110 rue du Ruisseau, 18th
How: Porte de Clignancourt (4)
When: The gardens are open, subject to the presence of a member, from 9am to 10pm in the summer and from 9am to 7pm in the winter.
Top tip: To learn more about the pedagogical aspects of the project, check out the association’s new website: http://lesjardinsduruisseau.fr/. Reflecting the fun, original and easygoing nature of the garden, the site also has an-up-to date events guide.