Home » Featured » A tale of two villages: Èze and Roquebrune-Cap-Martin 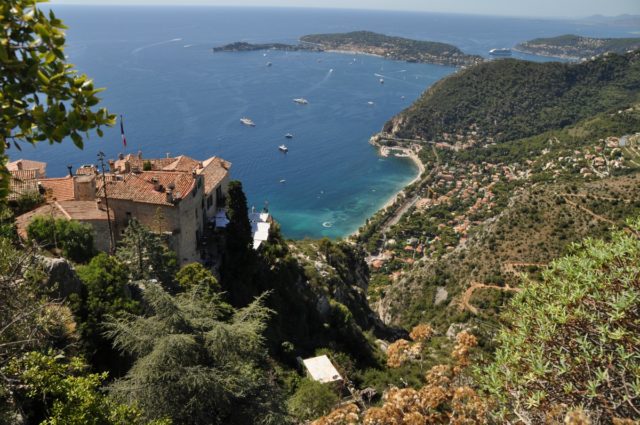 The spectacular view from the hilltop village of Èze (Photo: Tourist Office of Èze)

For a break from the bling of the French Riviera, take a trip to the beautiful hilltop villages of Èze and Roquebrune-Cap-Martin – where you’ll also find some of the best views around

The French were definitely onto something when, back in the Middle Ages, they created the villages of Èze and Roquebrune-Cap-Martin at the foot of the southern Alps. Nestling between the mountains and the Mediterranean, these hilltop havens overlook a landscape that is breathtakingly beautiful. Glance behind and, depending on the time of year, you’ll spot snow-capped peaks, fragrant pine forests and alpine flowers. Gaze before you, and you’ll be greeted by a sweeping seascape, as the dusky pink rooftops give way to azure-blue waters bobbing with gleaming boats.

Located at opposite ends of Monaco, best known for its glitzy casinos, yacht-lined harbour and the roar of the Grand Prix, the two villages are easily do-able in a day trip for those who fancy a break from the bling. Well worth the steep climb up to the top in both cases (or, for those feeling less energetic, Roquebrune-Cap-Martin also has a bus), you’ll be rewarded with some of the most magnificent views in the region. Just one word of warning though: Èze, in particular, can get very busy in summer, so it’s best to visit out of season, or at least go early or late in the day. 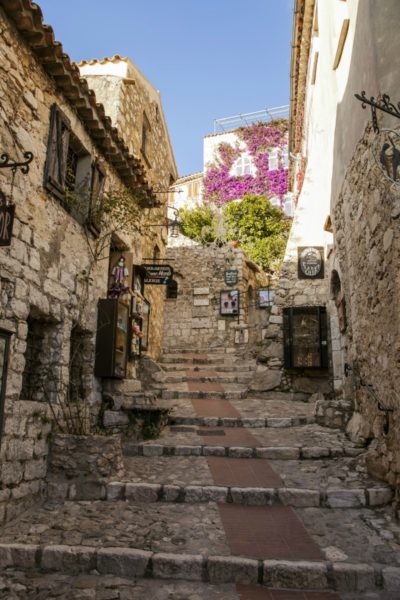 Perched on a rocky outcrop, some 1,400 feet above sea level, the picture-perfect village of Èze is also known as ‘The Eagle’s Nest’ because of its lofty location. Surrounding the ruins of a 12th-century castle, back in those days, the residents would have been more concerned with the invading pesky pirates than enjoying the views. Today, it’s the tourists who descend in their hordes, but visit out of season and you’ll be rewarded with charming cobbled streets, shaded squares, and artisan shops filled with colourful work by the many artists who reside here.

One thing you absolutely must do in Èze is to visit the award-winning botanical garden, the Jardin Exotique d’Èze, an Instagram-lover’s dream. On the south-facing side, you’ll find a wide range of spiky succulents from the desert regions, while the north face, with its caves and cascade, is home to lush plants from the Mediterranean and other humid regions. Dotted throughout the garden are statues that add their own poetry. On top of all that, the garden offers one of the most spectacular views of the French Riviera, extending all the way to the Esterel Mountains and the Gulf of Saint Tropez.

In fact, it’s well worth venturing out into the surrounding countryside, too, which is surprisingly verdant – with bananas, dates and citrus trees – because of the unique climate between the mountains and the sea. A designated Parc Naturel, there is great hiking to be found here – as well as an interesting museum, Maison de la Nature, dedicated to the rich fauna and flora of this Mediterranean landscape and the geology of the plateau.

Given the area’s perfect conditions for plants and flowers, perhaps it’s no surprise that the region is also famed for its perfumeries. There are two here that you can visit: Galimard, which has a charming museum and shop, and Fragonard, with its fascinating factory tour and shop. Other must-sees include the village’s ochre-coloured neoclassical church, Notre Dame de l’Assomption, which dates back to the 18th-century, and the older chapel, La Chapelle des Pénitents Blancs, from the 14th century. Last but not least, be sure to follow the Friedrich Nietzsche path, named after the German philosopher who wrote some of his work here, down the hill to the pretty, pine-shaded beaches.

Speaking of which, if you’re staying for lunch here, you absolutely must visit the lovely beachside restaurant, Anjuna Beach. Set in a cove at the foot of the cliff, they serve delicious local cuisine with an emphasis on seafood. They often have live music here too.

If you can’t bear to leave Èze after just a few hours, or are looking for a base from which to explore the region, the village is also home to one of the region’s most enchanting luxury retreats, the five-star Hotel Relais Château Chèvre d’Or. If ever there was a place to truly unwind, then this must surely be it, offering jaw-dropping views, a beautiful heated swimming pool and outdoor jacuzzi. Hugging the hillside, rooms are dotted through a cascade of gorgeous gardens, filled with sculptures, fountains, waterfalls, flowers, herbs and trees, and charming terraces on which to enjoy it all. Then there’s the two-star Michelin Star restaurant, popular with royalty, politicians and stars of the stage and the screen. What better way to end your day? 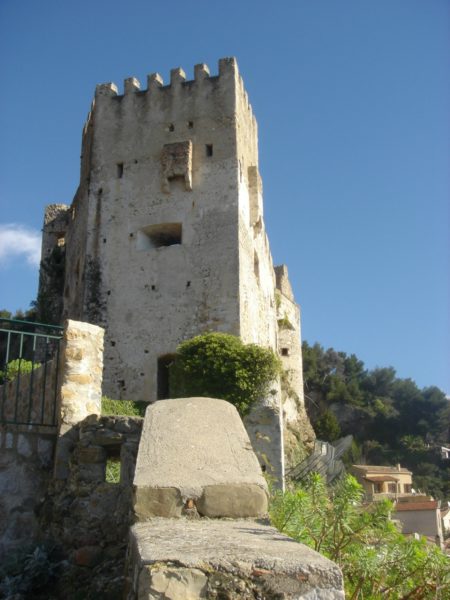 The 10th-century castle at the top of Roquebrune-Cap-Martin is one of the oldest in France (Photo: OTRCM)

Even if you decide to extend your stay in Èze, do make time to venture over to the neighbouring village of Roquebrune-Cap-Martin, too, one of the most enchanting hilltop villages of them all. In fact, this was Churchill’s favourite place on the entire Cote d’Azur. An easy half hour’s drive away from Èze (during which you can also swing past the famous viewpoint, La Turbie), here you will find quieter, winding streets, beautiful medieval houses and atmospheric alleyways – along with many a romantic restaurant to enjoy a local seafood dish.

Like Èze, this is a village that is popular with artists – and, in fact, the renowned architect Le Corbusier spent every August here for 18 years in a cabin that still stands today. Found next door to the fascinating Modernist villa of Irish architect Eileen Grey, both can be visited on a guided tour departing on foot from Roquebrune-Cap-Martin train station (advance booking essential). There is also a lovely path named after the architect, La Promenade Le Corbusier, which takes in stunning viewpoints along the coastline.

The village is perhaps best-known, however, for its 10th-century castle – one of the oldest in France – and, unlike in Èze, still standing. Naturally, additions have been made over the centuries, including notably by the Grimaldi family in the 15th century, but it provides a fascinating glimpse into more than 1,000 years of history. The castle also offers lovely views across the village rooftops and, ultimately, out to the coastline.

Do make time to see l’église Sainte Marguerite, too, which dates back originally to the 12th century. Like the castle, it has been subject to significant alterations down the centuries – hence the colourful Baroque-style façade – and is well worth a visit for its beautiful paintings and frescoed ceiling. Also, just east of the village centre, you will find one of the oldest known olive trees in the region, the Olivier Millenaire, which is believed to be around 2,000 years old. The lower part of the trunk is an impressive 16m (about 50 feet) in diameter. 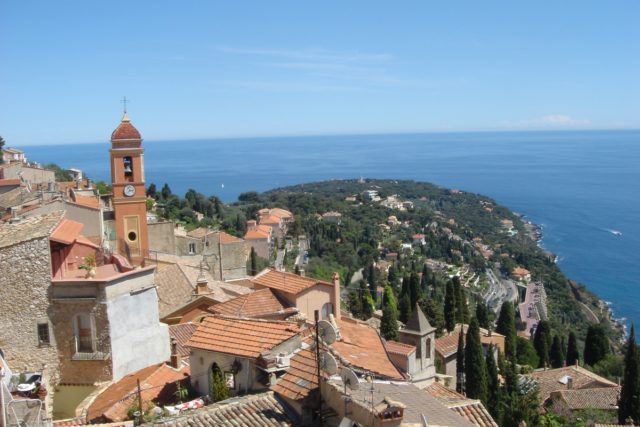 The panorama from Roquebrune-Cap-Martin (Photo: OTRCM)

We should also mention the Vallonnet Cave, one of the earliest sites of human settlement known in Europe. Discovered in 1958, the ancient cavern was declared a Historic Monument in 1963. Tucked away in a nearby ravine, it is unfortunately not open to the public, as archaeological excavations are still ongoing, but there is an excellent exhibition dedicated to it, Grotte du Vallonnet à  Roquebrune, at Menton’s Musée de Préhistoire Régionale.

Finally, for those of you considering a move to the French Riviera, do take a moment to explore the Cap-Martin area below, a beautiful wooded peninsula just beneath the village. As well as the beach, campsites and some shops, the area is covered with exclusive walled estates, some dating back to the 19th century and the Belle Epoque era.

So, from mountains, nature and the sea, to history, culture and art, these two medieval hilltop villages really do have it all – and, while they may be a little bit off the beaten track, they are more than worth the climb.

PICK OF THE HOTSPOTS

Top travel tip!
If you’ve got the bug for medieval hilltop villages, another lovely and rather lesser-known one is Haut de Cagnes.