Home » Featured » Japanese Gardens: An oasis of order and calm 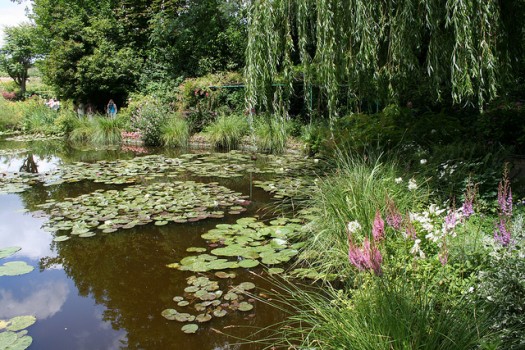 Paris has long had a fascination with all things Japanese, as borne out by the number of gardens in this style that are sprinkled across the city…

These last few weeks, craving some nature, I’ve been dreaming of exploring a number of Japanese gardens I’ve come across, hidden around the city. Many of these gardens I have stumbled upon by accident, stowed away behind museums or on rooftops, waiting to be discovered. They fit, by their very calm and controlled nature, perfectly into the density of the city, providing a welcome relief from it, just for a moment.

The appearance of Japanese gardens in Paris dates back to the 19th century when ukiyo-e woodblock prints began to arrive in the city, kicking off a craze for all things Japanese, aptly named japonisme. Former cinema, La Pagode, in the 7th arrondissement is a fantastic example of this phenomenon. Originally a ballroom, it was built in 1896 in pagoda-style architecture and restyled into a cinema in 1931. Sadly, it closed its doors a couple of years ago now, but many will recall the auditorium, decorated with ornate Edo-style frescoes, and the surrounding garden is planted with bamboo and guarded by bronze lions.

Elsewhere, the banker and philanthropist Albert Kahn first began work on his Japanese-style garden in Boulogne-Bilancourt in 1897, with inspiration drawn from two trips to Japan. Today, a Japanese garden still exists there behind a museum created in his honour, though with the museum currently under renovation, the garden is visitable only on pre-booked guided tours. Designed by Fumiaki Takano, the contemporary garden is one of the most extensive in Paris. The symbolism in the garden’s design is based upon fundamental Tao principles, although the garden was also designed to be a metaphor for Albert Kahn’s life. The museum itself is dedicated to some astoundingly early colour photography, produced by photographers funded by Kahn to travel the world, and also hosts changing exhibitions.

One of the most stunning Japanese gardens in Paris was built in 1958 as part of the UNESCO Garden of Peace. Designed by Japanese-American artist Isamu Noguchi, the garden was the first of its genre to be created by a sculptor as opposed to a landscape gardener and Noguchi clearly used his creative licence in its making. Most importantly, it is possible to see Noguchi’s garden from an upper level thus taking in the bigger picture; traditionally Japanese gardens are seen only from one viewpoint. The garden is also home to the Nagasaki Angel, originally belonging to the façade of the Urakami Church in Nagasaki. It miraculously survived the devastation of the city in 1945 and was donated to UNESCO by the Japanese government in 1976.

More recently built jardins japonaises include the Panthéon Bouddhique garden. An annex of the Musée Guimet, the museum was converted out of Émile Guimet’s hôtel particulier to house his collection of Asian art. The Japanese garden and tea pavilion were added behind the museum in 1992 and 2001 respectively. The garden is small but quaint, calm and orientated around a makeshift stream unobtrusively pumped around the stepping stones. Tea ceremonies are held at the Pavilion from time to time so it’s worth keeping an eye on the programme.

To really see the influence Japanism had on French cultural life, it is worth taking a trip out to the Fondation Claude Monet in Giverny, once home to the celebrated Impressionist and site of his famous water lilies. The foundation boasts a series of Japanese Edo-era prints, from which a fascinated Monet took inspiration. Nowhere is this more evident than in his garden. A jardin d’eau, with its Japanese bridge and its flowers and fruit trees native to Japan, it recalls the woodblock prints that Monet collected. With the peace of the countryside and the dozens of cherry trees, this is my choice for cherry blossom viewing.