10 of the best hip & happening hotels in New York

With VINGT Paris delighted to have expanded into New York, here we bring you a few of the hippest places to stay in the Midtown/Downtown districts 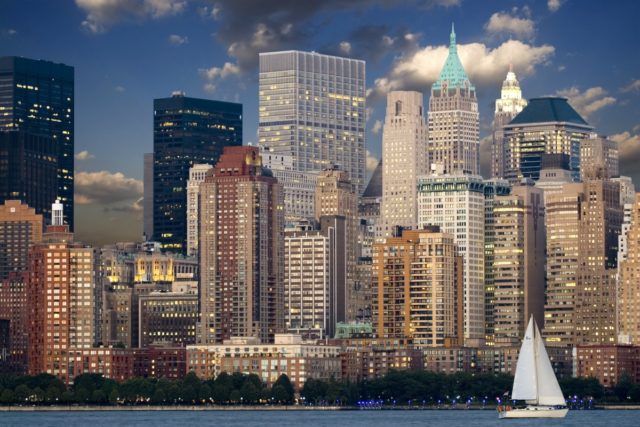 The famous skyline of New York 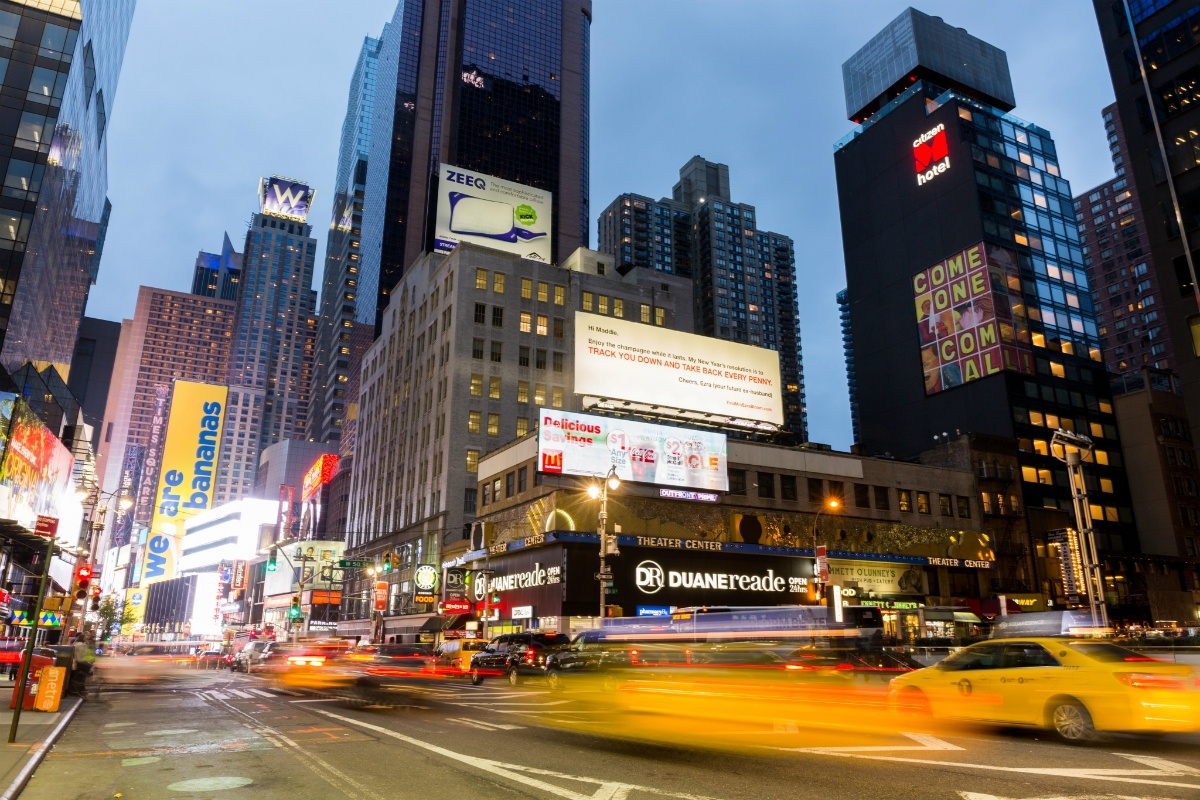 citizenM Times Square
218 West 50th Street
New York 10019
Tel: +1 (212) 461 3638
Priding themselves on bringing affordable luxury to New York, citizenM claims to have ditched the hotel clichés (there’s not a trouser press to be seen) and invested in the important things instead. So, while rooms may be pared-back to the minimum, they still offer super-comfy beds, wall-to-wall windows with blackout blinds, and triple-glazing and sound-proof walls (just as well given the hotel’s location on the iconic Times Square). The communal spaces are homely and fun, filled with books, magazines and paraphernalia from around the world, and there is a convenient 24-hour canteen. Best of all is the lantern-lit rooftop bar overlooking the world’s most iconic skyline

Gild Hall, a Thompson Hotel
15 Gold Street
New York 10038
Tel: +1 (212) 232-7700
Located on the edge of Lower Manhattan, the design of this luxury boutique hotel is a mix of Wall Street bling meets Aspen country house. Whilst it may sound a little eccentric, it works a treat. Plus, many of the guestrooms of this red-brick building boast views over Battery Park. At the intimate hotel restaurant, Felice Ristorante, you’ll find tasty Tuscan-inspired dishes, as well as an upper-level bar and wine lounge, La Soffitta, with its well-curated collection of Italian vintages and full selection of cocktails. Be sure to pick up a copy of their cute illustrated map by Brooklyn-based artist Carly Larsson to discover the best of the area.

The Greenwich
377 Greenwich Street
New York 10013
Tel: +1 (212) 941 8900
Described by Architectural Digest as “the most beautiful hotel in the world”, there is definitely something special about The Greenwich. From the charming red-brick façade and beautiful drawing room with internal courtyard to the private members’ club atmosphere, it’s pure class. With every one of the 88 rooms and suites also completely different, each has its own memorable attributes, though we’re lusting after the spectacular penthouses suites with floor-to-ceiling sloped windows – or the one with its own garden would do. There’s also a fabulous swimming pool, lantern-lit spa and health suite, plus we love the neighbourhood-style Italian taverna for its relaxed cosy dining. 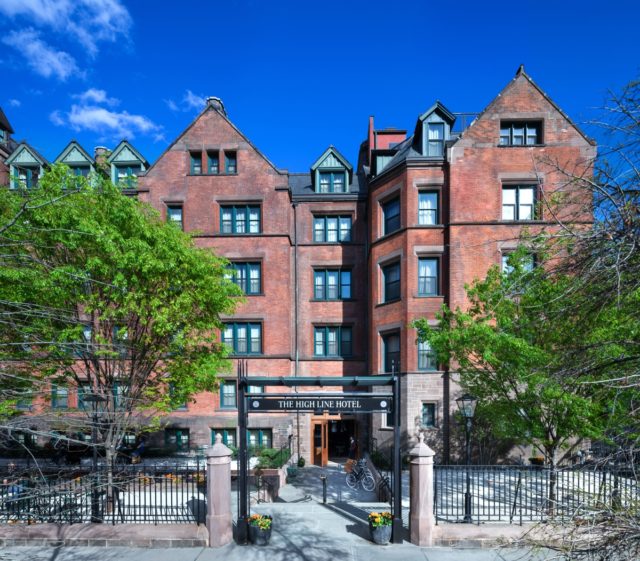 The High Line Hotel
180 Tenth Avenue
(at 20th Street)
New York 10011
Tel: +1 (212) 929 3888
Relatively new to the fold, having opened in 2013, the High Line quickly became not only a much-hyped hotel for travellers but also a favourite with locals. Found a stone’s throw from the elevated High Line urban park, it is located inside a gorgeous 19th century red-brick building that was once a seminary in another life. Each of the 60 light-filled rooms feature beautiful hardwood floors, one-of-a-kind locally-sourced furniture and large windows with attractive views of the High Line Park or the hotel’s cloistered garden. There’s no restaurant here (aside from a seasonal garden pop-up) but be sure to visit the attractive hotel coffee bar, Intelligentsia, for a freshly-brewed cup of coffee. 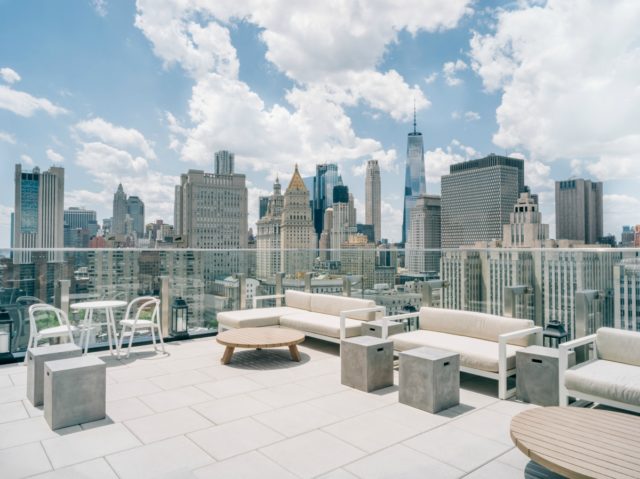 Hotel 50 Bowery
50 Bowery
New York 10013
Tel: +1 (212) 508 8000
One of our favourite hotels in New York, a stay here is worth it for the rooftop bar alone where you can enjoy some truly breath-taking views over the city. However, we also like this place for its arty, creative vibe. Aiming themselves at those who appreciate culture, the hotel has an impressive art collection featuring works by New York-based artists. Rooms are fresh and modern with a nod in their design to Chinatown – which is found right on the doorstep – and there’s an excellent Asian-American restaurant too. Service throughout the hotel is first-class – and that also extends to any four-legged friends, as this place is pet-friendly too. It all adds up to a very enjoyable experience.

The Knickerbocker
6 Times Square
New York 10036
Tel: +1 (855) 865 6425
Built in 1906, The Knickerbocker is one of New York’s most iconic hotels, having played host to the world’s biggest names during the early 20th century. Open for just 15 years, however, the onset of Prohibition brought an end to the party, and in 1921 the property was converted into offices. With its beautiful Beaux-Arts façade still intact, the building was designated as a New York City Landmark in 1988, and today it has been reborn as a Manhattan’s leading luxury hotel. Overlooking Times Square, the 330 spacious guestrooms also include some gorgeous suites; there’s a dazzling range of dining options; and the icing on the cake is the fabulous rooftop bar. 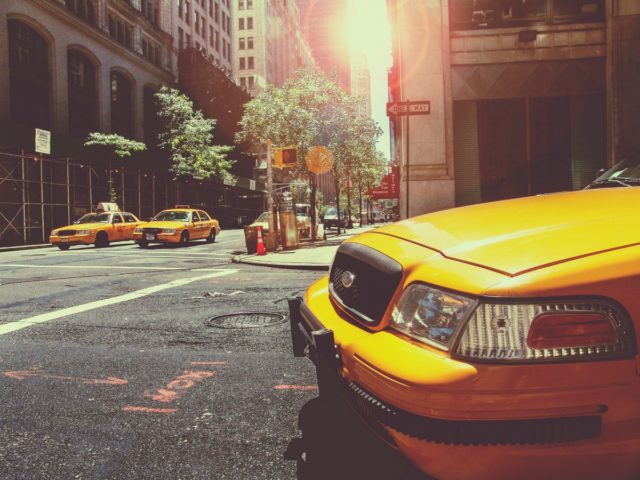 The London NYC Hotel
151 West 54th Street
New York 10019
Tel: +1 (212) 307-5000
With spectacular views over Central Park and the city skyline of Manhattan, staying at The London NYC hotel feels like you’ve just stepped into your favourite American TV series. Located in the Midtown neighbourhood, this luxury hotel also offers exceptional all-suite accommodation. Crafted by internationally renowned interior designer David Collins, every one feels glamorous and chic. In the stylish surroundings of The London Bar, you can enjoy a power breakfast, light lunch or cocktails, or kick back in your own room with one of the delicious-sounding dining options offered as part of 24-hour room service. Work some of it off with a visit to the state-of-the-art fitness centre.

Public, an Ian Schrager Hotel
215 Chrystie Street
New York 10002
Tel: +1 (212) 735 6000
The brainchild of renowned hotelier Ian Schrager, Public feels like something of a breath of fresh air. Providing all the essentials, but none of the unnecessary extras, prices are kept to a minimum. And yet, it’s cool – really cool. A hotel that is home to arts events galore, the lobby buzzes with creative types, the restaurant gets it just right with features like a wood-burning oven and the rooftop bar offers 360-degree panoramic views of the city and a spectacular outdoor terrace. After dark, it transforms into a late-night hotspot for international DJ’s. The rooms themselves are simple but functional, the star feature being the floor-to-ceiling windows with some seriously impressive vistas.

Refinery Hotel
63 West 38th Street
New York 10018
Tel: +1 (646) 664 0310
Oozing New York cool from every pore, the Refinery Hotel grew out of a former hat factory. Today, this characterful building, located in the Midtown area near Bryant Park, has been beautifully adapted for its latest incarnation while also recalling its industrial past. The stylish loft rooms boast soaring ceilings and hardwood floors while also featuring all the requisite mod-cons. For dinner, head to the characterful Parker & Quinn restaurant where the design touches span a century of New York history. Complete your evening with a drink at the fashionable Refinery Rooftop bar where you will find skyline views, strings of glowing lights and a superstar cocktail list.

Soho House
29-35 Ninth Avenue,
New York 10014
Tel: +1 (212) 627 9800
Famously founded in London in 1995 as a home from home for people working in the creative industries, today Soho House has bases in eight destinations across the world. In New York, the membership club comes complete with a super-stylish hotel next door – for which you don’t have to be a member to stay. What is more, the hotel gives you access to the club’s bars, restaurant, Cowshed Spa, screening room and, best of all, the rooftop pool. As you might expect, rooms at the hotel are the height of contemporary design, complete with rainforest showers and treat-packed minibars. Check out the ‘Plan your stay’ section of the website for the latest special offers.