20 of the best… blow-the-budget hotels in Paris 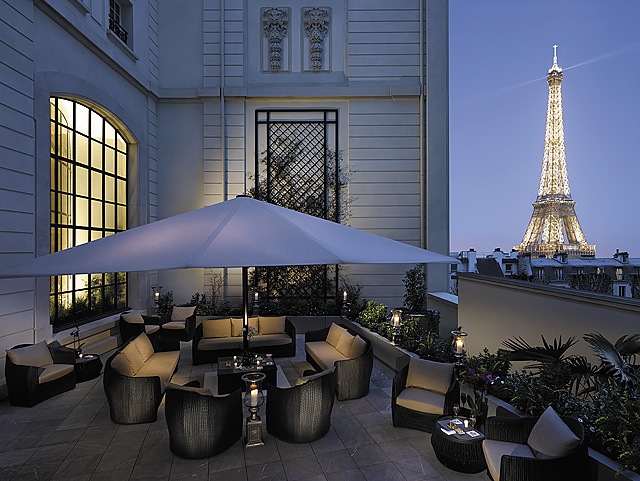 If you’re looking for somewhere special to stay, it’s no surprise that Paris is home to some of the most exclusive hotels in the world. From private terraces and underground pools to Michelin cuisine, here’s our pick of the best…

Hotel Barrière Le Fouquet’s Paris
46 avenue George V, 8th
Tel: +33 (0)9 70 80 91 11
Métro: George V
One of only a handful of hotels to be awarded the top designation of ‘Palace’ status, established by the French Minister of Tourism in 2010 to recognise the finest five-star establishments, this flagship Parisian property and its legendary brasserie are world-renowned. What is more, they have just completed a major renovation programme, with the 81 luxurious rooms and suites fully restored by interior designer Jacques Garcia, and the restaurants, bar and spa all enhanced. By the end of the project, in 2018, some 20 new rooms and suites will also be unveiled.

Le Bristol Paris
112 rue du Faubourg Saint-Honoré, 8th
Tel: +33 (0)1 53 43 43 00
Métro: St-Philippe-du-Roule
Definitely one for the more discerning traveller, this historic hotel was one of the first to receive the coveted ‘Palace’ designation. Having acquired almost mythical status in recent years, renowned in-particular for their impeccable service, they have become a benchmark for luxury hotels around the world. Offering 190 guestrooms and suites decorated in the classic 18th-century Parisian style, other highlights include the spectacular courtyard garden, mouth-watering Michelin fare (they have a grand total of four stars in their restaurant) and top-floor pool with views of the Eiffel Tower.

Hôtel Costes
239-241 rue Saint-Honoré, 1st
Tel: +33 (0)1 42 44 50 00
Métro: Concorde
Located just down the street from the VINGT Paris offices in the famous rue Saint-Honoré, this hip five-star hotel is home to a much-hyped bar complete with some complex cocktails and, frequently, a few famous faces – including, reputedly, Victoria Beckham. You’ll also find one of the most beautiful pools in Paris, complete with surround-sound system, and opulent rooms and suites resplendent in reds and golds. The hotel even has its own fragrance range available to purchase in the bespoke boutique.

Hôtel de Crillon
10 place de la Concorde, 8th
Tel: +33 (0)1 44 71 15 00
Métro: Concorde
Newly reopened in 2017 following several years of renovation, the historic Hôtel de Crillon has returned amid much excitement in the city. Dating back to 1758, this masterpiece of 18th century architecture, once the scene of Marie-Antoinette’s wedding celebrations, has long dazzled its visitors – and now there are new delights. Among the highlights are spectacular suites designed by fashion designer Karl Lagerfeld, new gastronomic restaurant L’Ecrin and a sparkling swimming pool where the tiles are overlaid with gold leaf. Now managed by Rosewood Hotels & Resorts, the hotel’s spa looks set to be sensational too.

Four Seasons Hotel George V
31 avenue George V, 8th
Tel: +33 (0)1 49 52 70 00
Métro: Alma / Marceau
Built in the 1920s, this beautiful Art Deco hotel is another in the exclusive ‘Palace’ club with almost 250 luxury rooms and suites decorated in the Louis XVI style. Many of them also feature private terraces overlooking the city. Then there’s the three-star Michelin restaurant, Le Cinq, the swanky-but-intimate spa facilities and that spectacular marble-clad lobby. Oh, and don’t forget the world-renowned wine cellar 14 metres underground and home to a collection of 50,000 bottles.

InterContinental Paris – Le Grand
2 rue Scribe, 9th
Tel: +33 (0)1 40 07 32 32
Métro: Opéra
At the heart of Parisian culture since 1862, this luxuriant four-star hotel offers superb views of the world-famous Palais Garnier, home to the esteemed Paris Opera, from many of its 470 guestrooms and suites. Culinary delights await at its two acclaimed restaurants, Café de la Paix, a Parisian institution, and La Verrière, set in a beautiful winter garden. In addition, the spectacular Salon Opera ballroom, with its illustrious history hosting the city’s most exclusive events, has been magnificently restored.

Hôtel Lancaster
7 rue de Berri, 8th
Tel: +33 (0)1 40 76 40 76
Métro: George V
Built as a private mansion in 1889, this exclusive five-star hotel still exudes the intimate ambience of a stylish home – and in fact has been used in the past as a long-term residence by Hollywood stars such as Marlene Dietrich. Today, among the 11 suites, is one named after her – reputedly stocked with a collection of her films. Other attractions here include an impressive array of art and antiques from Paris’ leading auction houses, an interior garden whose lush plants come from all over the world and the two-star Michelin restaurant, La Table du Lancaster.

Hôtel Lutetia
45 Boulevard Raspail, 6th
Tel: +33 (0)1 49 54 46 46
Métro: Sèvres – Babylone
Currently undergoing a major renovation, this Left Bank ‘Grande Dame’ has been much missed since closing three years ago for an overhaul. Known for its beautiful Art Nouveau façade, Art Deco-style interior and the important role it played during the German occupation, it will reopen as the third property of The Set Hotels, alongside London’s Café Royal and Amsterdam’s Conservatorium Hotel. Details so far are being kept mostly under wraps but word on the street is that this is going to be something very special indeed.

Le Meurice
228 rue de Rivoli, 1st
Tel: +33 (0)1 44 58 10 10
Métro: Tuileries
Another one with the coveted ‘Palace’ status, this world-renowned hotel combines 18th century opulence with contemporary chic – courtesy of renowned designer Philippe Starck who worked on the refurbishment of 2016. Ideally situated in front of the famous Tuileries Gardens, accommodation ranges from gorgeous guestrooms through to luxurious suites up to off-the-scale grand apartments. The gastronomy is all overseen by acclaimed chef Alain Ducasse, and his two-star Michelin restaurant, le Meurice Alain Ducasse, is heralded as one of the world’s most beautiful dining rooms.

Mandarin Oriental
251 rue Saint-Honoré, 1st
Tel: +33 (0)1 70 98 78 88
Métro: Concorde
Found just a short walk from the VINGT Paris offices in rue Saint-Honoré, the Mandarin Oriental is located in a striking building dating back to the 1930s. Given that it has the all-important ‘Palace’ status, the interior doesn’t disappoint, either, with 138 elegant guestrooms, 40 stunning suites and the breath-taking Royale Mandarin Suite with 360-degree views of the city. There’s also a ‘secret’ garden, superb spa and a choice of eateries managed by the celebrated multi-Michelin-star chef Thierry Marx.

Nolinski
16 avenue de l’Opéra, 1st
Tel: +33 (0)1 42 86 10 10
Métro: Pyramide
Priding themselves on being a five-star hotel aimed at those looking for something a little different, the ‘inner circle’ if you will, this characterful haven offers rooms designed in the style of Parisian private apartments – every one of them in a different design. Indeed, the devil is in the detail here with even a complimentary smartphone during your stay, complete with unlimited internet. Other highlights include the beautiful Brasserie Réjane, with its magnificent brass bar, and the super-stylish spa offering cutting-edge treatments and products straight from the Swiss Riviera.

Park Hyatt Paris-Vendôme
5 rue de la Pai, 2nd
Tel: +33 (0)1 58 71 12 34
Métro: Opéra
One of the most luxurious hotels in Paris, the Park Hyatt is located in an elegant building near the prestigious Place Vendôme and Palais Garnier. Offering world-class dining in five different restaurants, a celebrated spa and 153 contemporary guestrooms with seriously swanky bathrooms, not to mention some jaw-dropping palatial suites, it’s no wonder this is another hotel with the all-important ‘Palace’ designation. What is perhaps rather more surprising is that it’s also pet-friendly too with dogs welcome.

The Peninsula Paris
19 Avenue Kléber, 16th
Tel: +33 (0)1 58 12 28 88
Métro: Kléber
Born from one of the city’s original ‘grand hotels’, which in its day hosted such renowned guests as Marcel Proust, Pablo Picasso and George Gershwin (who wrote An American in Paris whilst staying there), The Peninsula Paris now provides the very height of luxury. With a rooftop restaurant and terrace offering 360-degree views, an underground spa and swimming pool and one of the most expensive suites in the city, it’s no surprise that they too achieved the prestigious ‘Palace’ distinction in July 2016.

Hôtel Plaza Athénée
25 avenue Montaigne, 8th
Tel: +33 (0)1 53 67 66 65
Métro: Alma / Marceau
Located on the tree-lined avenue Montaigne, home of Parisian haute couture, this spectacular ‘Palace’ hotel has played host to celebrities, politicians and even royalty ever since opening in 1913. Recently refurbished, they now offer 154 guestrooms and 54 suites, all beautifully designed with French décor in mind, and many have views of the Eiffel Tower. There are also five restaurants, including the three Michelin-starred Alain Ducasse au Plaza Athénée, and they are home to Europe’s only Dior Institut, offering exclusive spa treatments.

La Réserve Paris – Hotel and Spa
42 avenue Gabriel, 8th
Tel: +33 (0)1 58 36 60 60
Métro: Franklin D Roosevelt
Found just around the corner from the Elysée Palace, in a grand Haussmann-era stone-fronted mansion, this five-star hotel only opened at the start of 2015 but had already picked up the ‘Palace’ distinction by November 2016. Offering the most refined 19th century Parisian chic coupled with cutting-edge technology, an interactive tablet controls the TV, the temperature and the lighting in the 26 suites and 14 guestrooms. The double Michelin-starred restaurant, Le Gabriel, serves the finest contemporary French cuisine, and the sumptuous spa features a 16m pool.

Ritz Paris
15 place Vendôme, 1st
Tel: +33 (0)1 43 16 30 30
Métro: Madeleine
After an almost cinematic build-up, the most famous hotel in Paris reopened its doors in summer 2016 to much fanfare following an extensive four-year renovation. Ever since first opening in 1898, the Ritz has been a gathering place for royalty, politicians and well-known names, such as Marcel Proust, Ernest Hemingway, Coco Chanel, Audrey Hepburn and Maria Callas, and that continues to this day. With stunning suites, haute cuisine by chef Nicolas Sale, custom cocktails in the legendary Bar Hemingway and a state-of-the-art Chanel spa, surely it can’t be too long before this five-star hotel achieves its ‘Palace’ status?

One of the world’s most famous hotels, the Ritz Paris (Photo © Vincent Leroux)

Le Roch
28 rue Saint Roch, 1st
Tel: +33 (0)1 70 83 00 00
Métro: Pyramides and Tuileries
While the lounge at Le Roch has the feeling almost of a private home, complete with a fireplace, comfortable chairs and shelves full of books, this boutique hotel doesn’t have five stars for nothing. The design is refined, yet warm and welcoming, the service is exemplary and the swimming pool and spa are a haven of pure serenity. The 32 rooms and five suites have also been kitted out to an exceptionally high spec with walnut flooring, Carrara marble and generously-sized bathtubs. Oh, and there’s a secret terrace too.

Shangri-La Hotel Paris
10 avenue d’léna, 16th
Tel: +33 1 53 67 19 98
Métro: Iéna
It may be owned by a company in Hong Kong but the Shangri-La is brimming with old-world French elegance reminiscent of the days when it was home to Napoleon Bonaparte’s grand-nephew, Prince Roland Bonaparte. Balanced with all the modern-day luxury you could wish for, this legendary address also boasts some of the best views of any hotel in the capital, two Michelin-star restaurants and a lovely indoor pool lit by natural light. With the one hundred or so rooms and suites designed to feel like a high-class private Parisian residence, this is another one in the exclusive ‘Palace’ club.

La Samaritaine
19 Rue de la Monnaie, 1st
Tel: N/A
Métro: Pont Neuf
Founded in 1870, the famous La Samaritaine department store epitomised the modernised Paris of Baron Haussmann. An architectural masterpiece, with its blend of Art Deco and Art Nouveau, this beautiful building has sadly lain empty for more than a decade. Now, however, a multi-million euro project is under way to reopen it as a mixed-use complex with a grand store, gourmet restaurant, cafés, offices, apartments and a prestigious hotel with 72 rooms. Operated by luxury group Cheval-Blanc, this five-star establishment is mooted to be opening in summer 2018. Watch this space…