Home » Paris Escapes » Nice work if you can get it…

Nice work if you can get it… 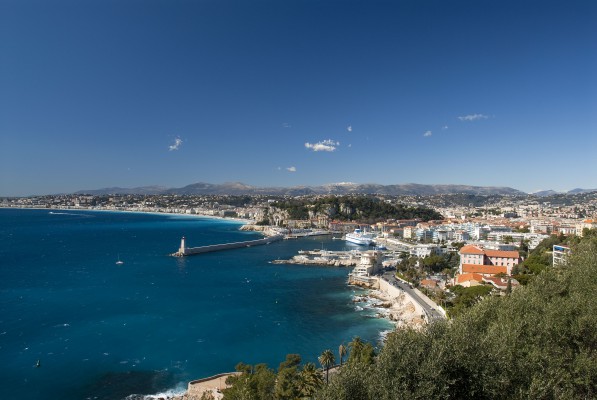 The spectacular view over the natural harbour of Nice

The jewel in the crown of the Côte d’Azur, Nice continues to sparkle with its beguiling mix of seaside splendour, artistic heritage and great gastronomy – as well as much more besides…

Nice – welcome to ‘la vie au sud’. This gem of the French Riviera has long been one of the most sought-after European holiday destinations for those looking to escape northern climes for a bit of Vitamin D and to dip their toes in the Mediterranean. But Nice is more than just lazing by the beach; its architecture – a mish-mash of Beaux-Arts, Art Deco and Baroque  – somehow knits together and gives this city its inimitable flavour. Likewise, the people you tend to run into in Nice are a motley crew of elegant pensioners dressed in top-to-toe Dior (when of a certain age) as well as the occasional movie star and a fair few selfie-snapping tourists.

Founded by the Greeks and later a retreat for 19th-century European elite, Nice is today regarded as the unofficial capital of the Côte d’Azur. To learn more about the history of the city, start with a visit to ‘Vieux Nice’, the warren of streets around the castle, which has only been fully accessible since 1921 when the river Paillon was covered over. Packed with cafés, gelaterias, pizza places and tourist-tat shops, it is atmospheric if you divert off the main drag and delve deeper into the heart and soul of these historic streets. Rich in Baroque buildings, churches and palais, be sure to seek out the Musée du Palais Lascaris for a gem dating back to 1647.

Be sure to pick up some Provençal produce

Staying in the old part of the city, we recommend taking a breather at one of the two Fenocchio ice cream parlours. Founded in 1966, they offer an impressive 94 flavours (59 ices-cream and 35 sorbets), ranging from great classics to exciting innovations such as thyme, Rosemary, violet, tomato, basil, lavender and many more. For edible souvenirs, make your way to Confiserie Florian, once frequented by Matisse no less, and where you’ll find daintily-presented glazed fruit, candied flowers, delicious chocolates and exotic jams such as rose-petal preserve.

And what of that mythical beach? For those unfamiliar with Riviera beaches, don’t expect to feel grains of soft, white sand underneath your feet – you’ll need a deckchair or mattress to get comfortable on this pebbly stretch. There are both public and private beaches, each with their own pros and cons and character.

All that sea air works up an appetite, and Nice’s gastronomy offers plenty of temptations. Not surprisingly, given its proximity, Italian influences feature prominently in the local cuisine, as of course does seafood. If you’re looking for somewhere authentic, search out Lou Pistou, a tiny neighbourhood bistro where you can queue up for Niçois specialities. One of the most famous local delicacies is socca, a chickpea flour pancake that tastes better than it sounds! Fried courgette flowers are also a must-try, and a vrai Soupe de Pistou is worth the wait.

Another good address is La Merenda – surely one of the only restaurants with no telephone, so you’ll have to go there in person to make a reservation. Be warned, it’s also pretty tight for space – and credit cards aren’t accepted either. However, the regional cuisine here, cooked up by a chef who left his two Michelin stars behind to reconnect with his passion for local dishes, is so good that it makes it all worthwhile. Be sure to wash it down with a glass (or two) of chilled Provençale rosé.

A few others worthy of mention are Olive et Artichaut, focusing on foodie-led fresh local produce (booking required); L’Ane Rouge, renowned for its amazing seafood; L’Ybane for high-quality Lebanese mezze; and Oliviera, offering a beguiling mix of French/Mediterranean produce. For something more relaxed or on the go, Chez Palmyre is small, good-value and a locals’ fave; Stuzzico is a great ‘hole in the wall’ pizza joint; and at La Casa Della Piadina, you’ll find Italian flatbreads featuring hundreds of different fillings.

Lastly, if you’re heading up the coast at any point towards Monaco, be sure to stop off at the best ‘secret’ address in the region. While it may look for all intents and purposes like a simple village bistro, Café de la Fontaine, in La Turbie, is where Michelin-starred chef Bruno Cirino keeps in touch with his culinary roots. For the full gastronomic experience, head to his flagship restaurant, L’Hostellerie Jérôme, also in La Turbie. In addition, there’s also his newer vegetarian/vegan restaurant, Racines Bruno Cirino, back in Nice. 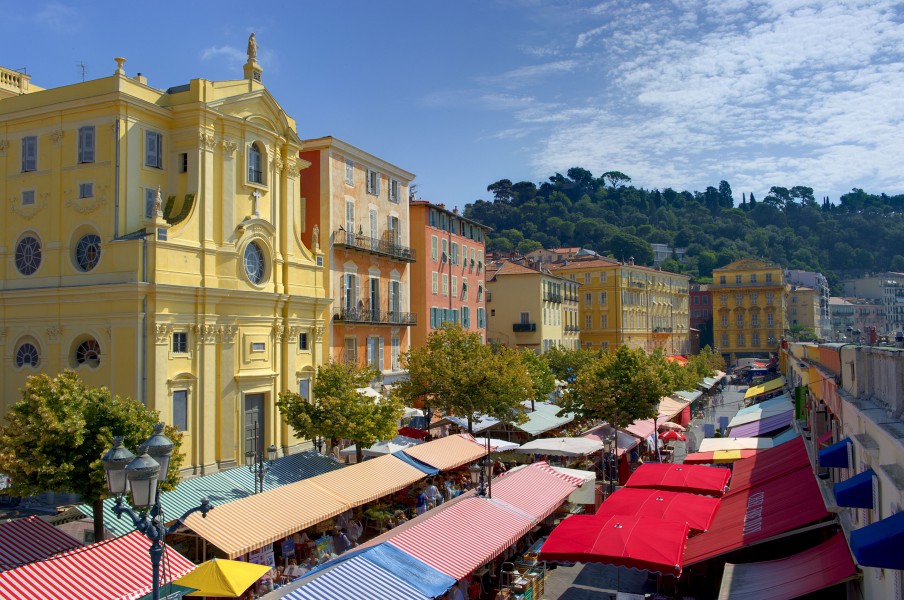 The popular market of Cours Saleya where you can buy flowers, vegetables and fruit

Shop ’til you drop

If you’re interested in trying your hand at making a few local specialities yourself, the Cours Saleya market, selling fruit, vegetables and flowers, is the place to go. Located at the foot of the town, close to Vieux Nice, it offers the most colourful produce in lovely surroundings. For a ‘real-life’ taste of the city, go north of the station to Marché Liberation where the locals do their shopping. Here you can find the freshest fruits de mer, a whole street of fishmongers and the best fruit and vegetables Provence has to offer.

For vintage lovers, head to the monthly flea market at Place Garibaldi on the third Saturday of the month. Alternatively, you can browse the antiques selection at the Marche aux Puces overlooking the Port de Nice on Rue Robilant. We also like the antiques market that takes place on a Monday in the Cours Saleya.

Long a Mecca for artists, drawn to the stunning seaside setting and special light, the city has some great galleries to visit too. As one of Nice’s most famous former residents, Matisse has his own musée in the Villa des Arènes. Home to one of the world’s largest collections of his works – from paintings and drawings to objects belonging to the artist – it’s a must-visit. Another ‘big one’ is the Musée de Marc Chagall, which was purpose-built to house the artist’s religiously themed works, including 17 works illustrating the biblical message.

Elsewhere, the Villa Arson, an old aristocratic home, houses an elite art school but also an impressive contemporary art collection – and the large grounds are perched atop a hill with fabulous views overlooking the city and coastline. Alternatively, the beautiful simplicity of naïve art is celebrated at the Musée international d’Art Naïf, situated in an old chateau set in a large park. To get a feel for the ancient side of the town, head to Maison d’Adam et Eve, a historic home featuring the beautifully decorated bas-relief facades common to the region – this one dates from 1584 and features Adam and Eve fighting with clubs.

For the more adventurous, another great thing to do here is to go scuba diving – especially as many consider the South of France to be the birthplace of the sport. Back in the 1930’s, the first sports scuba dive school opened on the French Riviera – and the legendary underwater explorer and inventor of the Aqua-Lung, Jacques Cousteau, also began his diving odyssey here. In Nice itself, there are numerous dive operators in the area by the port, such as Poseidon, offering day and night dives to more than 30 diving sites.

One of the highlights locally, on the Cap de Nice, is a large reef complete with a statue of the Virgin Mary – the scene of several weddings over the years! In the neighbouring bay of Villefranche, noteworthy sites include a coral grotto, a shallow reef that is ideal for beginners, some deep drop-offs and an airplane wreck suitable for advanced divers. Just around the headland, Cap Ferrat also has some great diving, too, including underwater cliffs. Alternatively, you can take a snorkelling trip from Quai Lunel, in Nice, over to Cap Ferrat.

There’s a treasure around every corner in Nice

Room with a view

In terms of where to stay, one of the most famous hotels on the French Riviera is Le Negresco – the ‘Grande Dame of Nice’ – in all its Baroque glory. Offering stunning sea views, this Belle Epoque beauty is found on the Promenade des Anglais, named after the English aristocrats who flocked to the city in the 19th century. Today, this five-star residence is also notable for its Regency-style restaurant, Le Chantecler, which has two Michelin stars.

For another place with great views, it’s hard to beat Le Méridien. Located on the seafront, this four-star hotel offers magnificent vistas over the ocean – including from its rooftop restaurant. Alternatively, there’s La Pérouse, also a four-star hotel, which also has its own private beach.

In summary then, Nice is a city with more than one dimension – and the choice of how many you explore or get close to is entirely down to you. In any event, whether you consume the city’s history, culture or cuisine, or just soak up some of those Mediterranean rays, this jewel of the French Riviera has lost none of its lustre.