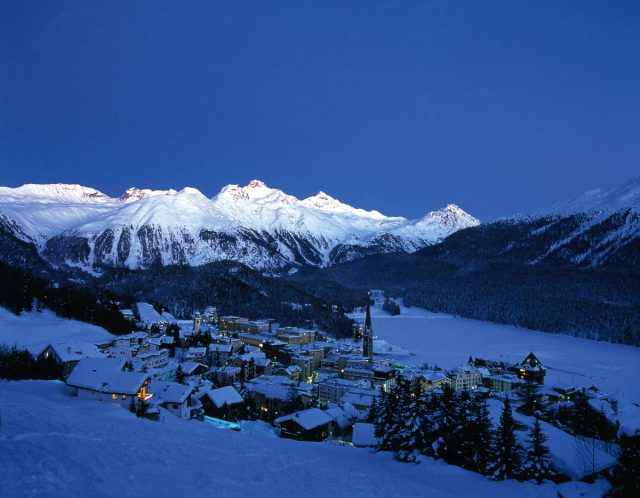 With its idyllic Alpine setting, illustrious Olympic heritage and inimitable lux lifestyle, St. Moritz is one of the most prestigious ski resorts in the world. Susie Hollands brings us the inside track

Located in the enchanting enclave of the Engadin Valley, in the middle of the Swiss Alps, St. Moritz is a ski resort unlike any other. For a start, it’s impossibly pretty, perched as it is between a magnificent mountain backdrop and a vast lake of ice, and then there’s the fact that it is regarded as the birthplace of Alpine winter tourism, having attracted seasonal visitors here for more than 150 years. But there’s something else too…

Over the years, St. Moritz has become synonymous with style and sophistication in a way that no other resort has quite achieved. To understand why this is, we need to go back to the moment when this picturesque ski spot was chosen to host the first official Winter Olympics in 1928. Aside from the unparalleled sporting heritage, here was an event of unprecedented prestige in the Alps. Suddenly, St. Moritz was the place to see and be seen.

If any further endorsement were needed, the resort’s status as a luxury winter destination was secured when it was again chosen to host the Olympics in 1948. And, the rest, as they say, is history.

Today, St. Moritz is considered to be one of the most prestigious ski resorts in the world, attracting everyone from royalty and showbiz stars to business leaders and Instagram sensations. Aside from the spectacular scenery and pristine ski runs, they come for the plethora of grand hotels, luxury boutiques and gourmet restaurants that line its picturesque lanes. Indeed, an impressive one in ten restaurants here has received a culinary award.

Rather more unexpectedly, there is also the fact that this exclusive Alpine retreat is home to some excellent art galleries and museums. So, there really is something for all tastes. 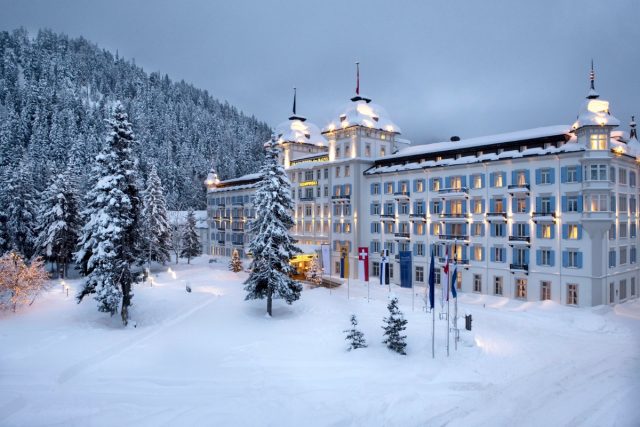 The resort is renowned for its first-class hotels such as the Kempinski (Photo (C) Benno Thoma, St. Moritz Tourismus)

Of course, what brings most people here, though, is those sparkling snow-covered slopes – which have played host to no less than five Alpine Ski World Championships. Further popularised in not just one but two James Bond films (The Spy Who Loved Me and A View to A Kill), it’s no wonder this is one of the most famous ski resorts in the world.

Furthermore, with over 80 pistes to choose from, ranging from demanding downhill runs through to beginners’ slopes, there is also something for all levels. For those in need of lessons, check out the Swiss Ski School, the oldest ski school in Switzerland having started in 1929, or the Suvretta Snowsports School also comes highly recommended.

For the more experienced, one of our own top tips is to take the cable car up to the 3,303m-high Piz Corvatsch, with its enchanting ice cave, and then ski down to the lower part of the resort, St. Moritz-Bad, by the lake. This exhilarating 9km-long black run – known as the Hahnensee Slope – offers truly breath-taking vistas over this frozen fairy-tale landscape.

For another truly special experience, be sure to join the ‘Corvatsch Snow Night’, where you can coast down the longest lit ski slope in Switzerland at 4.2km. Open every Friday evening in winter from 7pm until 2am, it really is a magical experience as the snow glitters against the night sky. 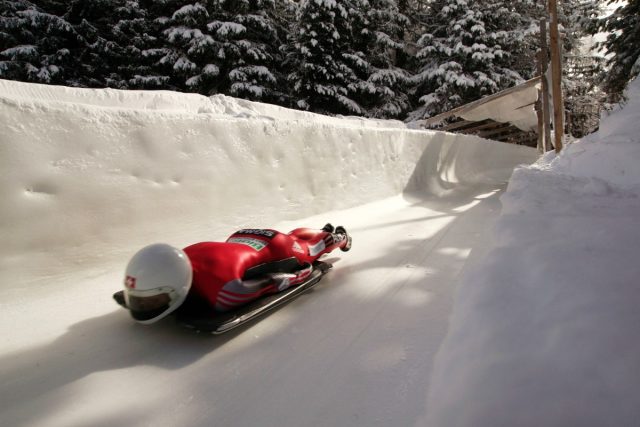 As well as the renowned ski slopes, St. Moritz is also home, of course, to the legendary Cresta Run – a world-championship toboggan track originally conceived in the winter of 1884/85. Starting in St. Moritz, the route winds its way down a narrow valley to what was the village of Cresta, but that now forms part of Celerina.

Whilst the run is typically used by the experts, beginners can have a try by booking into one of the designated training sessions – or, alternatively, you can also have a go on the neighbouring Olympic bob-sleigh track. However, with potential speeds of over 100km per hour on both routes, they are not for the fainthearted! https://www.stmoritz.com/en/golf-at-1800m/

Elsewhere, there are a whole host of other winter activities that can be enjoyed – from stunning hiking opportunities and skating on the frozen lake to mountain yoga sessions, adrenaline-inducing snow-kiting and even a round of golf. Otherwise, if watching sport is more your thing, perhaps you might enjoy a game of ice cricket (St Moritz is home to the prestigious Cricket On Ice trophy) or, at the other end of the scale, a tournament of snow-polo.

Best of all, though, is the wild adrenaline rush of the White Turf thoroughbred races (like nothing else you’ll ever have experienced). Organised in St. Moritz for well over a hundred years, and held on the frozen lake, this is the highest horse-race in Europe. 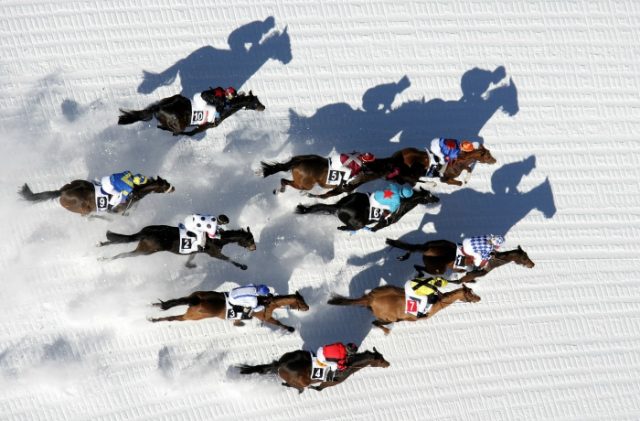 For something a little more sedate, how about a trip to the healing mineral springs? Discovered some 3,000 years ago, St. Moritz has long been renowned as a spa town. Nowadays, it is still possible to enjoy these iron-rich mineral water and to buy items such as Alpine mud packs – which make a great souvenir.

Other good mementos include local specialities such as the famous Engadine nut tart, the charming vintage posters of the resort or look out for some festive fairy-lights. Fun fact: Switzerland’s first electric light was switched on at the historic Kulm Hotel here during the Christmas of 1878.

At the other end of the scale, fashionistas will be spoilt for choice with the profusion of designer labels found across St. Moritz – and be sure to squeeze in a visit to Via Serlas, Europe’s highest outdoor shopping promenade, during your trip.

Of course, the other thing we haven’t talked about yet is where to stay – but, suffice to say, you won’t be short of luxury options. As we touched on earlier, there’s a whole host of fantastic five-star hotels in St Moritz.

As well as the aforementioned Kulm Hotel (one of the most iconic and also where the Cresta Run begins), other favourites include the Grand Hotel des Bains Kempinski (all-out luxury in a breath-taking mountain setting); Badrutt’s Palace Hotel (one of the region’s most renowned hotels and a one-time favourite of Alfred Hitchcock); and the Carlton (a picture-perfect hotel with views over the lake).

Alternatively, if you’re looking for something a little different, the Grace is a newly-renovated boutique hotel also overlooking the lake (due to open in 2020) – or, for best value, you can’t beat Hotel Eden (a friendly, family-orientated hotel).

Incidentally, it’s worth knowing that if you book more than one night at any hotel offering the Hotel and Ski Pass combination, you’ll also get your ski pass for a much cheaper rate. With this special offer, you get to enjoy not only the hotel accommodation but also up to 88 pristine ski pistes, three snow parks, 58 mountain railways and cableways and access to 32 mountain restaurants with snow terraces. 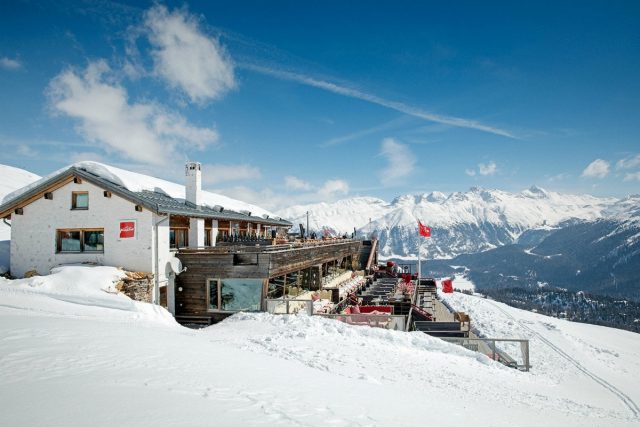 On that note, the restaurant scene in St. Moritz really is out of this world. From cute slope-side chalets serving specialities such as fondue and nut tarts – one of our own favourites is El Paradiso –all the way through to the finest Michelin fare, you’ll be sure to find it here.

Other more relaxed dining options include the popular pizzeria at Badrutt’s Palace, ‘Chesa Veglia’, a draw for locals, tourists and stars alike; the gourmet restaurant and club called CHE-CHA, close to Chantarella, the middle station of the Corviglia; or, for a break on the slopes, the Georgy-Hütte, beyond Pontresina, is the highest mountain hut in the Engadine.

Finally, there is also a vibrant social scene here in St. Moritz and a host of great places to enjoy a drink or two. Among our own favourites are the Renaissance Bar, a cosy retreat at Badrutt’s Palace; the Hossa Bar, one of the best-known in the Engadin; or Devil’s Place, a bar that is reportedly home to the world’s largest whisky collection. And why not finish the night with a visit to the Casino St. Moritz in the Grand Hotel des Bains Kempinski or by clubbing at glitzt nightspot, Dracula?

Whatever you decide to do during your stay in St. Moritz, you won’t be disappointed. In short, this is the height of skiing sophistication at its very best.