Your natural sunrise alarm clock just went off. You got it because you hate getting up to a ringing sound. This is more natural, more détente, less… boulot. You grind your own fair trade Guatemalan coffee and get your iPad. You read the latest edition of Paris Match online while listening to France Inter. You’re part of a generation that is quite branchée; you can do many things at once, as long as they involve technology. After a quick shower with some olive oil soap you hop onto your fixed gear bike — the black one with tan leather grips. You’re a graphic designer at this boutique agency in the Haut Marais so naturally you get invited to the vernissages where Michel Gondry plays the drums for Oui Oui, or where you once met Bambounou, and now you play his music at work on the soundcloud app you downloaded. You are a noteworthy office DJ. Did I mention that your iPhone is connected to the office speakers via WiFi? In fact, most things you use are connected to other things via WiFi. You and your partner don’t believe in marriage, but you do believe in finding a nicer loft maybe further into the 10ème, but not too far from the Canal because you like to meet up at Chez Prune at five. You don’t have a child yet, but you hope that Zadig et Voltaire will make baby clothes by the time you do. People call you a Bobo but really you’re just a creative mind with a good salary.

Set in the opulent surroundings of the 17th-century place des Vosges, perched on the corner of Rue du Pas de la Mule beneath the vaulted arcades, Café Hugo reopened its doors to the public this summer... Read more

Words and Images: Jill Pope If it sometimes feels like the bohemian hey day of the 6th and 7th arrondissements is behind it, Restaurant Sauvage has brought back a rather contemporary reinterpretation of that free and easy lifestyle. The small space is smartly kitted out with plywood tables and long benches along one wall, which gives a… Read more

Search properties in this area 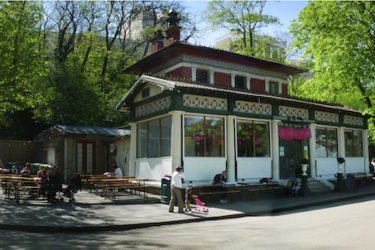 Located inside the Buttes-Chaumont park, this bar/restaurant is Paris outside of Paris, an ideal place to go to watch the sun set over the city. You can either sit on the grass with…Read more