The 5th arrondissement has been home to the Quartier Latin for eight hundred years. Lutèce, ancient Paris, was born on the slopes of the 5th. The arrondissement saw the first glimmer of Roman civilization, anorexic saints, bewigged intellectuals, and pavement‐throwing anarchists.

The 5th is eternally old and new. Students mill along Le Boul’ Mich’ (Boulevard Saint Michel) and indulge in beer‐fueled debauchery in the pre‐medieval hills of the Montagne Sainte Geneviève. The Latin Quarter is the epicenter of historical and classic Paris.

Start your trip back in time from the Place de la Sorbonne. The dome of the Sorbonne houses the Grand Ampithéâtre constructed by the notorious Cardinal Richelieu.

Walk up the Boulevard Saint Michel (against traffic) heading towards the Panthéon. At the roundabout of Rue Soufflot you’ll see the lush Luxembourg Gardens on your right, and the majestic Panthéon to your left.

Between the Panthéon’s neoclassical columns lie the “Great men (and women) of France”; Voltaire, Rousseau, Marie Curie, Alexandre Dumas and others who brought honor to La Patrie. The Panthéon’s honeycombed dome and gothic interior are especially impressive feats of architecture.

Look at the area surrounding the Panthéon, and notice the Lycée Henri IV (the most elite high school in Paris), the Law and Economics departments of the Sorbonne and a church built on the site of a pagan temple and containing the tomb of Saint Geneviève. The Montagne Sainte‐Geneviève’s namesake was a young nun who significantly influenced the political forces in her day (500 A.D). Her religious fervor was so strong that she voluntarily became anorexic which contributed to her harrowed appearance, yet she somehow managed to divert Attila the Hun’s attack on Paris.

Continue your journey on the northern side of the Panthéon following the Place du Panthéon to the Rue Cujas. Turn right onto the Rue Saint Jacques. Notice you’re walking behind the main building of La Sorbonne! Imagine you’re a rebel student in May 1968 or in theology class with Cardinal Richelieu.

Turn left on the Rue du Sommerard and you’ll stumble on the Place Paul Painlevé.

Without a doubt the Musée de Cluny – Musée National du Moyen Âge is one of the most fascinating museums in Paris. The Musée de Cluny rests on the ruins of Gallo‐Roman baths clearly visible from within the museum. In addition to inspired temporary exhibits on Parisian history, the museum’s permanent collection includes the famous La Dame à la Licorne (The Lady and the Unicorn) tapestry. A charming medieval garden is attached to the museum. Have a calming moment amidst roses, hyssop, climbing flowers and herbs, and vegetal medicinal remedies from the Middle Ages.

Exit the museum and make your way to the Boulevard Saint Michel. Walk with the flow of traffic towards the Seine. Facing the river is the quintessential Parisian meeting spot – Fontaine Saint Michel. Friends, students and lovers have been meeting at the fountain for generations.

Walk along the Quai Saint Michel towards Notre Dame. On the right, just off the Quai de Montebello, is the iconic bookstore Shakespeare and Company. Since the late George Whitman opened the doors in 1951, the jam-packed English‐language bookstore has been a haven for young writers and literary luminaries including Anaïs Nin, Allen Ginsberg, and Henry Miller. The counter‐culture vibe and the bohemian spirit of the 1960s still flourish in the tiny world‐renowned shop.

Passing Shakespeare and Company, the partially hidden Eglise Saint‐Julien‐Le‐Pauvre is on the right just up the Rue Saint-Julien-LePauvre. Take a peek into the courtyard just north of the church. In the center of Square René Viviani is the oldest tree in Paris. The locust tree planted in 1601 can be recognized by the concrete crutches holding it aloft.

Take a leisurely stroll along the Quai de la Tournelle and check out the bouquinistes (book sellers) on the banks of the Seine.

Leave the Institut du Monde Arabe and walk along the Quai Saint-Bernard. On balmy summer nights, the sounds of tango music can be heard on Sunday evenings at the Jardin Tino Rossi. Amateur and professional tango dancers converge for colorful, sensual spontaneous performances.

Continue along the Quai Saint‐Bernard to the Jardin de Plantes. The major botanical garden of Paris is a favorite of joggers. The garden itself includes a school of botany, beautiful glass hothouses, and rose gardens. The Grande Galerie de l’Évolution within the Muséum national d’Histoire Naturelle is the only place in town to meet rare, extinct, and flat out bizarre specimens of evolution. The Galerie’s jewel‐box ceiling and regal architecture guarantees something suited to everyone’s interests.

Adjacent to the Grande Galerie de l’Évolution on the Rue Linné and Rue Daubenton is the much loved Grande Mosquée de Paris. The largest mosque in France is friendly and welcoming to Muslims and non‐ Muslims alike. The gorgeous Hispano‐Moresque structure, with graceful arcades, eye‐popping desert colors and mosaics, is a sight to behold. The tea salon within the mosque is arguably the best in Paris, as are the vigorous hammam massages.

Game for another walk to finish up the day?

Exit the mosque and turn left onto the Rue Georges Desplas. Turn right on Rue Daubenton and follow the street until the Place Censier Daubenton. Turn left down the Rue Monge then right onto Rue Censier.

The lovely gardens surrounding the Eglise Saint‐Médard and roundabout of Place Saint‐Médard are packed with cafés and even a delicious pastry shop. Carl Marletti is known for his tarte au citron (lemon tart) and for his rigorous Japanese‐inspired aesthetic.

Onwards and upwards towards the Place Contrescarpe are more cafés and places to grab a quick bite. The summit of the hill is party central. Bars, pubs, wine bars, restaurants and nightlife abound. Students flock to Café de la Nouvelle Mairie – or the “CNM“‐ for an after‐class drink or just to kick off the night. The “CNM” is off Rue Mouffetard, taking a left on the Rue Thouin and following the Rue de l’Estrapade until the leafy square appears.

Or shadow Ernest Hemingway in A Moveable Feast and The Sun Also Rises and hit the bars along the Rue de la Montagne Sainte‐Geneviève.

Watering holes are a dime a dozen in the area. Le Piano Vache is the cheeky name of a subterranean bar that is as Quartier Latin as you can get. Tattered, beer‐stained, lively and international, the “Cow Piano” is perfect for a pint. Just don’t be tempted by the piano. We’ll wager it hasn’t been tuned in a couple of decades.

A little dark humor and jazz with your pint? At Le Caveau des Oubliettes you can have a pression next to the only guillotine left in Paris (52 Rue Galande near Eglise Saint‐Julien‐Le‐Pauvre). The bar is also known for its stellar jazz performances.

A mellow and delicious dinner can be found at Les Papilles on the Rue GayLussac. Always prix‐fixe, Les Papilles is a table d’hôte quite unabashedly focused on excellent wine. Homey and comfortable, reservations are recommended.

For full‐on old school Paris, turn to the Bouillon Racine. It’s hard to imagine that this Art Nouveau palace was once a blue‐collar canteen. The menu is more Michelin than canteen these days, and the renovated wrought iron and mirrored décor is one in a million.

Look no further than Le Reminet for a romantic evening. Overlooking the Seine and Notre Dame, Le Reminet offers an updated French menu in a candlelit limestone setting. Bonus! The lunch menu is under 15 euro!

Finally, the dining establishments vying for top spot in the 5th arrondissement are Itinéraires and L’Agrume. Tucked away from the Seine, Itinéraires has elegant and innovative French‐Italian cuisine with seamless service. If you want to impress, Itinéraires is a winner. L’Agrume opened to accolades out of the gate. Located on the border of the 13th arrondissement, L’Agrume is tiny, seasonal, and fiercely loyal to its ingredients. Reservations are recommended if you can snag one.

Jazz aficionados will dig the Caveau de la Huchette. Count Basie, Art Blakey and more legends have played in the namesake caves. Live entertainment every night, no cover charge, what more can you ask for?

In short, there is nothing short about the 5th arrondissement. Long timeline, trailing cobbled streets, vast gardens and green boulevards, exploring the 5th is the ultimate classic Paris experience.

You’d never guess that this was a former blue‐collar canteen in the early 1900s. The original Art Nouveau interior is positively breathtaking. It is a big step above the traditional French canteen fare.

Le CNM is a classic student wine bar, with the extra highlights of natural wines and knowledgeable staff.

Vinyl addicts unite! Jazz on vinyl from today, the 1960’s and 50’s. The shop is a musty, tattered, and beloved extension of the Crocodisc label.

The rendez‐vous point for students and lovers for generations. 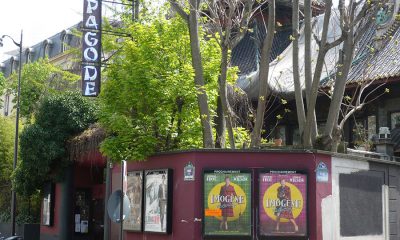